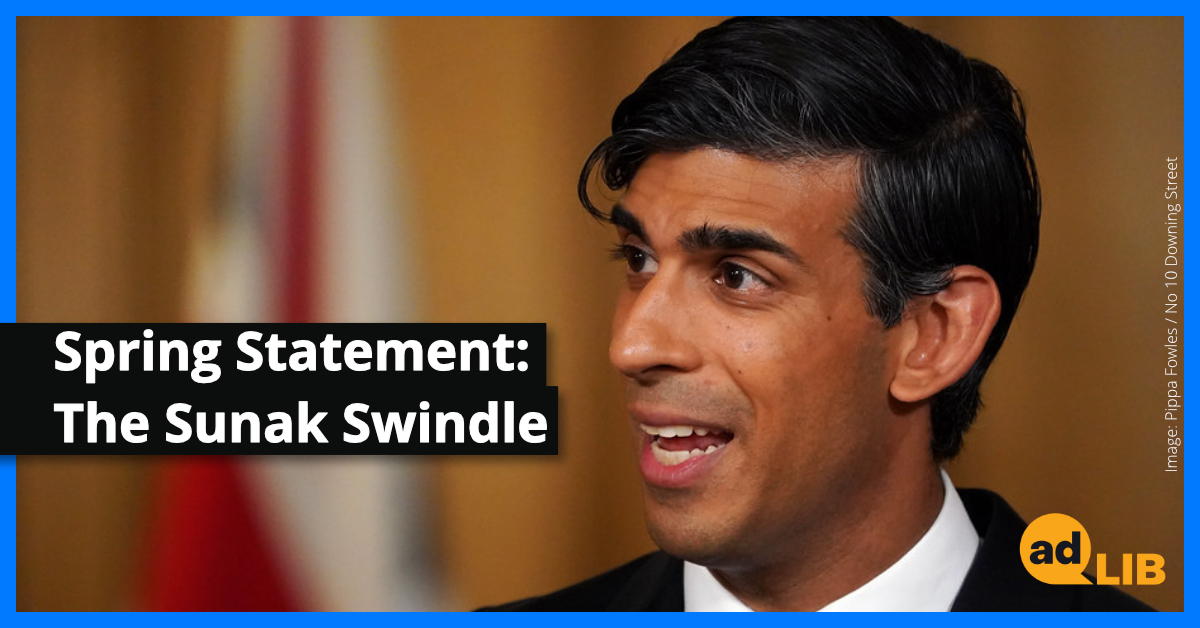 The Spring statement was a Sunak Swindle - hiking up people's taxes today while promising to cut them in future.

Buried in the small print is a tax bombshell that will see the average family paying £1,600 more in taxes over the coming years.

Rishi Sunak is following Boris Johnson's lead by not being up front and honest with the country.

This was crunch time for the Chancellor and the Conservatives, and they haven't stepped up to the mark.

The Conservatives' manifesto-breaking rise to National Insurance will come into force on April 6th, hitting families with a tax rise of around £360. Meanwhile, the Chancellor's announcement he will be increasing the threshold people start paying National Insurance won't take effect until July 6th.

The Liberal Democrats have tabled an amendment to bring forward the rise in the National Insurance threshold to April 6th, helping to minimise the impact of Rishi Sunak's tax rises on millions of families.

Under the Conservatives' plan, families will feel the full force of Rishi Sunak's tax hike for three months before any cushioning from the raising of the National Insurance threshold.

This delay will mean families face an extra tax hit of £2.1 billion, compared to if the threshold was increased immediately.

Rishi Sunak wants you to believe he's a low-tax chancellor. But over the last two years, he's broken manifesto promise after promise to introduce 15 tax rises on families and businesses.

Today's statement from Sunak is swindling the British people. Nothing to stop the cost of living crisis, nothing to stop eye-watering inflation and nothing to stop budget cuts to schools. A shocking Tory failure to rise to the crisis facing millions of people.

And while he's telling us to tighten our belts and get on with it, he's wasting more of our money than any other Chancellor - ever. He's wasted £10 billion on unusable PPE, written off over £4.3 billion in Covid fraud (and won't even let the National Crime Agency look into it!) and handed big banks a £4 billion tax cut.

And perhaps most disappointingly - the most desperately in need in our society have had their Universal Credit cut by over £1,000 a year. Increases in rates are well below inflation, and the "offset" of reduction in the taper rate does little in practice. Sunak is punishing the weakest in society at a time when they need our help the most.

Families are being clobbered with unfair tax hikes, and are paying the price for this massive missed opportunity.

Liberal Democrats have called for the standard rate of VAT to be reduced from 20% to 17.5% for one year. This would save households £600 on average.

The Lib Dem plans would support the economy by boosting spending on local high streets. The proposals would also be expected to keep inflation down by making the prices of everyday items lower than they would have been.

While energy bills are rising, oil and gas producers are making huge, unexpected profits. Liberal Democrats would introduce a Robin Hood tax on the oil and gas barons' massive profits.

We'd use proceeds of the windfall tax to: Double the Warm Home Discount and extend it to everyone on Pension Credit and Universal Credit; double the Winter Fuel Allowance; roll out an emergency home insulation programme; support small businesses in energy-intensive industries.

And we'd reinstate the £1,000 boost to Universal Credit - and make it permanent. And we called on the Chancellor to raise benefits in line with the true level of inflation - currently at 6.2% - rather than a paltry 3.1%.

Rishi Sunak can put out as many expensively-produced spin videos as he wants. But we know he's turned his back on the British people.

Britain deserves the fair deal - the Liberal Democrats are fighting for it.